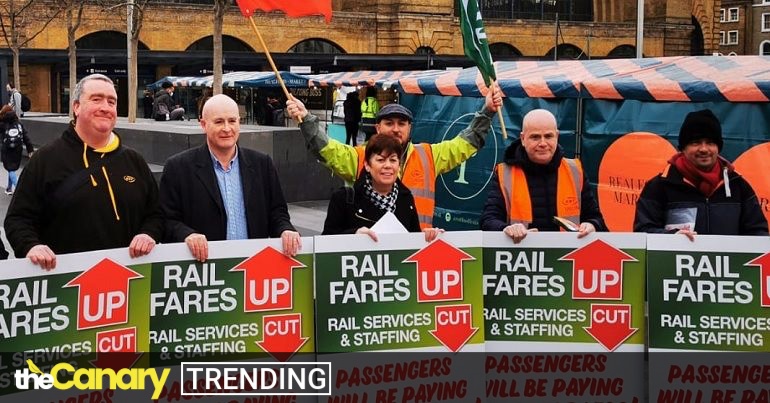 Establishment hacks had a rough week. Smug, pompous and overpaid, the likes of Kay Burley, Richard Madeley, and Piers Morgan probably feel pretty invincible most days. But these three media cronies bit off more than they could chew this week. Their nemesis came in form of Mick Lynch – straight-talking secretary-general of the National Union of Rail, Maritime and Transport Workers (RMT)  – who was doing the media rounds on behalf of the union’s membership as they went out on strike.

Shock and awe is an overused term. But Lynch left interviewer after interviewer slack-jawed and panicking – with his quickly emerging fanbase cheering along. Sky’s Kay Burley was one of his first wins.

The presenter, who didn’t seem to know what a picket was, rambled about what would happen if a worker tried to cross one. Burley then tweeted the interview, claiming – in a masterclass on projection – that Lynch had been “flustered”. For his part, Lynch showed no sign of being flustered and just tried to answer the rather poorly framed questions:

Agency rail workers will be stopped at picket lines and asked not to cross.

Meanwhile, Piers Morgan had acquired a screengrab of Lynch’s Facebook. As a joke, Lynch had changed his profile picture to an image of The Hood, a 1960s puppet supervillain from the Thunderbirds, to whom he bears a resemblance. Morgan spent several minutes embarrassing himself by talking about the picture without asking about the actual strikes.

Lynch calmly watched this meltdown before asking why Morgan was so obsessed with his Facebook profile:

Watching a number of interviewers with daft questions trying get a rise out of RMT boss Mike Lynch, only to have their arse handed to them, has been a rare joy. And doubly so when Piers steps up with the Thunderbirds…pic.twitter.com/QeA88S5oPY

And it wasn’t just Lynch’s quick wit or his tendency to toy with the media wing of the ruling class. His no-nonsense analysis of the state of the country was absolutely bang-on.

For example, in a few minutes he captured how billionaires were sucking up money while telling everyone else to tighten their belts. And how there was a major power deficit in the UK which only organised workers could address:

Mick Lynch of the RMT says funding cuts made by a “government of billionaires” are to blame for rail strikes – accusing ministers of ‘telling everyone else they’ve got to tighten their belts while they’re raking it in’.

Who even are you?

In another hilarious interview, Labour politician Jenny Chapman bumbled through a debate with the RMT leader while muttering about her class background with Lynch declaring he didn’t even know who she was:

Mick Lynch tells Baroness Chapman ‘I don’t even know who you are’ pic.twitter.com/WfHltePybc

Presenter Richard Madeley went full Alan Partridge by bizarrely asking Lynch whether he was a Marxist. To which Lynch replied that Madeley was talking “twaddle”:

The media, including the left-leaning media, is filled with tedious middle class voices. The RMT strike has placed working class politics centre stage, and Mick Lynch has done a rousing job arguing for their interests. As he has pointed out, it doesn’t take a Marxist revolutionary to figure out that things need to change.

Workers, not bosses, produce all that is good and necessary in this country. It’s time to start making sure they get what they deserve.

Featured image via the RMT