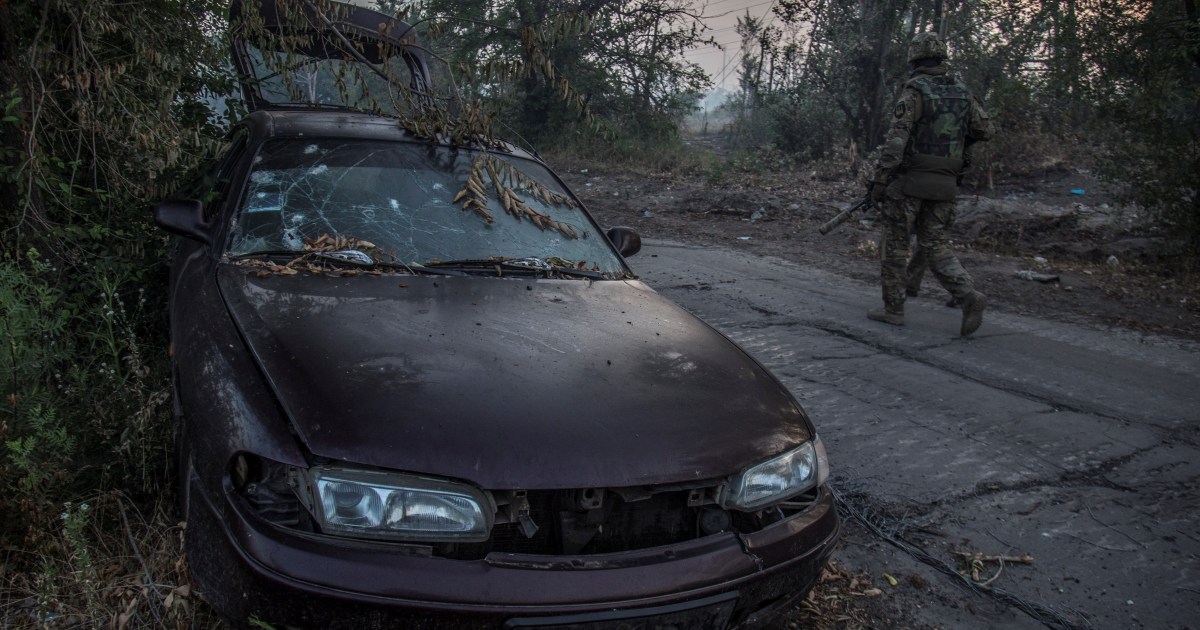 In the seventeenth week of Russia’s war on Ukraine, Kyiv is poised to become a candidate for the European Union, signalling another step away from Russia’s sphere of influence.

Earlier this week, President Volodymyr Zelenskyy signed into law the Istanbul Convention on preventing violence against women, as part of a broader diplomatic effort to secure unanimity for Ukraine’s candidacy before the EU summit, which takes place on Thursday and Friday.

“Every day we prove that we are already in the orbit of European values,” Zelenskyy said, as the European Commission described Ukraine as “well advanced in reaching the stability of institutions guaranteeing democracy, the rule of law, human rights and respect for and protection of minorities”.

Key EU members Germany, France and Italy have already said they will back Ukraine’s candidacy.

“The [EU candidacy] status has chiefly a symbolic political character, which underlines that Ukraine belongs to Europe, it doesn’t belong to the Russian world as Russia wished … so it has political weight,” said Panayotis Ioakeimidis, professor of European policy at the University of Athens.

Since Russia invaded Ukraine on February 24, citing security concerns over the encroachment of NATO on former Soviet territory, Ukraine has de-emphasised its NATO aspirations in favour of European ones.

It formally applied for EU membership four days into the invasion. Two weeks later, Zelenskyy told European leaders he did not believe NATO membership was a real prospect for Ukraine.

“We have heard for many years about the open doors, but we also heard that we can’t enter those doors. This is the truth, and we simply have to accept it as it is,” he told EU leaders in a video conference.

A Rating Group poll in June among Ukrainians showed high support for both institutions – 76 percent for NATO membership and 87 percent for EU membership.

Both NATO and the EU are set to expand as a result of Russia’s war. EU members Finland and Sweden applied to join NATO in May. Their candidacies are to be put to a vote at the NATO summit in Madrid at the end of the month.

Russia seeks gains on the ground

Meanwhile, Russia is pressing for battlefield victories that would dampen these Western political triumphs.

Ukrainian intelligence suggests Russian forces will make a push to take all of Severdonetsk and the neighbouring Lysychansk – Ukraine’s easternmost free cities – by June 26.

Ukraine continued to frustrate those efforts this past week, despite being outgunned by a factor of at least 10-to-one.

An estimated 2,500 defenders remained in possession of the Azot chemical plant in Severdonetsk, which makes up a third of the city.

After the fall of Mariupol, the battle has emerged as a new symbol of the tenacity and superior tactics that have enabled Ukraine to keep its better-armed and wealthier neighbour at bay for four months.

Ominous developments have taken place further south, however, which may decide the fate of Severdonetsk and Lysychansk.

Russian mercenaries, reportedly from the Wagner Group, appear set to cut off that entire theatre of operations from logistics lifelines. On June 15 they took over the settlement of Vrubivke, throwing Ukrainian defences back to within 10km (6 miles) of the critical Bakhmut-Lysychansk highway.

A further push came on June 21, when Russian forces seized Mykolaivka and were fighting for Yakovlivka and Bilohorivka, all right next to the highway.

Ukrainian defenders still have other lines of supply, but Russia is closing in. Ukraine’s defence minister says he desperately needs more heavy weapons.

There was more bad news for Ukraine on the same day. Russian forces took a series of villages within 10km of Lysychansk. The Russian advance forms a spar thrusting west and threatening a close encirclement of the Lysychansk-Severdonetsk front.

These Russian successes have come at a high cost. The battle for Severdonetsk began in earnest in late May, and has absorbed an estimated 10,000 Russian soldiers using an enormous amount of artillery.

During that month, Ukraine advanced to the Russian border north of Kharkiv, and has thrown Russian forces on the defensive in Kherson. The latest counterattack has been on the garrison at Snake Island in the Black Sea, which Russia has been fortifying.

The following day, Ukraine’s Centre for Strategic Communications reported that a series of Russian command posts is being moved away from the front.

“The Russian command understands that now their [command posts] are in danger at a depth of up to 30km from the front line. Of course, this will only negatively affect the management of troops,” says the ministry.

That management has been lacking.

If Ukrainian intelligence reports are accurate, Russian President Vladimir Putin is so unhappy with his commanders’ performances that he is rotating top commanders in Kherson and the Rosguardia – the Russian National Guard.

“Such drastic rotations within the Russian military, if true, are not actions taken by a force on the verge of a major success and indicate ongoing dysfunction in the Kremlin’s conduct of the war,” said the US-based Institute for the Study of War (ISW).

Among the rank-and-file, Russian losses have been high.

Ukraine estimates them at 34,100. Most recently, Russia is reportedly consolidating two battalion tactical groups from the 5th General Army because they have lost combat capability. It has also reportedly withdrawn the army of the separatist forces in the Donbas to restore its combat readiness.

The British defence ministry reports that Russia is prosecuting its war in the east with “increasingly ad hoc and severely undermanned units” advancing on foot.

Low Russian morale is making the job of recruitment hard. Ukraine’s military intelligence published what it says are transcripts of conversations between Russian soldiers.

“There were 10-25 people left in the companies,” says one. A company normally consists of five dozen to 10 dozen soldiers.

“Even if you come now as platoon commanders, you have no one to work with. There are no sappers or crews. There are no leaders. We are already so morally killed.”

Other published conversations recount efforts to be sent home from the front, or complaints about hospital treatment in Russia. An intercept revealed that Russia is bringing in units from Sakhalin island in the Pacific, to fight for a period of six months without rotation.

“The Russian military is offering substantial financial incentives to secure additional recruits with increasing disregard for their age, health, criminal records, and other established service qualifications,” says the ISW.

A BBC report concurs, saying conscripts were being sent to the front with a week’s training or less.

Ukrainian morale, on the other hand, remains high. A Rating Group poll among Ukrainians showed that 93 percent believe they will prevail against Russia, with two-thirds preparing for at least another six months of war.

What support from Europe?

The question is, what support will Ukraine receive from its Western family members?

“The clear victory Ukraine seeks, and which mainly London and Washington support, is to eject the last Russian soldier from every square foot of Ukrainian land, including Crimea and the Donbas,” said Ioakeimidis.

Russia occupied the Donbas and Crimea in early 2014, before launching a full-scale invasion on February 24 this year.

Since then, the United Kingdom, Poland and the Baltic states have seen Ukraine’s war of independence as Europe’s war of empowerment, while France and Germany have taken a more cautious approach.

“Returning to pre-February 24 borders is acceptable to old Europe, but ejecting Russians completely is what divides the allies … If Russia is ejected from Crimea and the Donbas, that is a humiliation that could lead to nuclear war,” said Ioakeimidis. “It is impossible.”